We have been blessed to have another excellent week. We are teaching a couple of different families that are progressing and yesterday we were able to put ourselves in touch again with someone we were afraid we would not see again.

Last week I told a little about Alberto. As a quick update, he now has a full-time job, with fixed hours and a salary. That is something truly unimaginable looking at where he was literally just two weeks ago. He has been truly blessed, and so have we as we have seen his progress. He works on Sundays and so for the time being will not be able to attend church or progress in that way, but what he has accomplished thus far is of itself a miracle.

Every day requires a true and renewed effort, but it is not hard when I get thinking about all those people waiting and wanting to know more. And so here we go, another week.

Lots of love,
Elder Brighton
Posted by glad tidings of great joy at 6:37 PM No comments:

Though I do not hope to do it justice in a simple email correspondence, I would like to share a few details of a special experience we had this last week.

My companion and I have been praying a lot over the last weeks to find people prepared to receive the message of Christ and of repentance. During this time, we have begun teaching over 25 new people, many of which have taught me different lessons. I would like to share the story of one of them named Alberto.

Last Tuesday my companion and I were walking down one of the main streets in a neighborhood when a young man that passed called out to us as he passed saying, "Elders". Since most people refer to us as "hermanos" and not Elders, we decided to quickly reach out to him and talk to him before he passed by. We quickly realized he was not in all of his 5 senses because of the effects of drugs, but he happily said hello and said he wanted to talk to us in another occasion. He told us vaguely where he lived and continued on his way, somewhat oblivious to all around him. We did not think much of the experience.

When the night time came and it was time to plan, the young man came into our minds and we were going to be near where he had indicated. We made plans to go and visit him. The following morning when we arrived, he was there and waiting for us. Because of the potentially larger audience of this letter I will skip a lot of the details of that first visit. Suffice it to say that he had very strong drug addicitions that he had had for a long time. Because of those addictions, the rest of his life had been strongly affected, involving him in atrocities of all kinds. At one point in the lesson he lifted up his shirt and showed us the still red and recent strips and scabs on his back from the thrashings that were given him as well as many burn scars from other experiences with violent torturings he had gone through. He told us many other things.

As we shared the lesson of the restoration of the gospel, church, and priesthood authority, he asked for a priesthood blessing to overcome both his addictions as well as what he considered to be curses that had been placed on him by dark and wicked people he had associated himself with earlier in his life. As we placed our hands on his head and began to gave him that priesthood blessing there was a change in the room. Few times have I ever felt so guided as I spoke, and I do not remember a time when I felt more real the power and authority that we hold. When the words and the blessing came to a close, we shook his hand, gave him a hug, and promised to return the following day. Really unsure of what we would find and what could possibly be done there. Truthfully, I had never heard things so dark and horrible as I did in that lesson that day.

We returned the next day to be the witnesses to the beginning of a miracle. Alberto told us the day previously had been perhaps the best of his life. He began to explain why. (Again, I will not be able to relate all that he told us, just because of time).

He said, Elders I have something to confess. When you left yesterday I went into the bathroom to shower and change, and all of a sudden from deep down inside and without my expecting I began to sob like a child. I have not cried since I can remember, but I could not stop. As it came out I felt like I was being cleansed. And instead of feeling bad, I felt a great peace come over me as I wept and wept.

He had mentioned the day before that because of his situation he had not had contact with his mother or family for years. That very same day after showering and dressing he went out to visit her. In that visit his mother cried as he explained the changes he had felt and his new desire and power to overcome. (Since that day it seems he has had daily contact with her again).

He told us how he had planned that way to lie in wait for the two people that had whipped him and cut him with a glass bottle a few days before, with plans to return all the damage he could. That same afternoon when he ran into one of the young men, he grabbed him by the arm to keep him from running and then looking him in the eyes forgave him and exlained that he no longer wanted to have any problems. He forgave the man while his back was still oozing from the beating he had taken at his hands.

When he returned to his home, he pilled everything he had in his home that he had robbed or stolen or obtained from other unrighteous ways. He took the pile to the huge cliff drop-off that is in front of his house and threw it all over the edge. He included some inappropriate magazines that he had. He did a cleansing of his house.

And in short, that night he was able to make huge progress in his drug addictions, as he spoke with those that participate with him and explain that he will no longer be involved. He said that the cravings that he had felt daily for years were simply non existant now and he did not have a desire to participate. Additionally, a friend of his had called him constantly that night asking where he was and how he was doing, looking out for him and offering support, something he had not ever done, and on the very same day and night that he had made that decision and received the blesssing. He recongized it as the hand of the Lord.

The story of Alberto is just beginning and it is certainly not over nor is it won yet. Since that first day we have seen him almost every day as we strengthen his commitment and desire to not just leave bad things, but also replace them with the commandments of God and a firm commitment to obey them. He has introduced us to his friend, and we are now teaching him, his wife, and his daughter.

The power of the Priesthood of God is real. It healed people through their faith in the times of Christ, and it continues to heal those that have faith today. I am a witness of its power working through me blessing the lives of others in drastic and unbelievable ways. I know God lives.

with love,
Elder Brighton
Posted by glad tidings of great joy at 7:46 PM No comments: 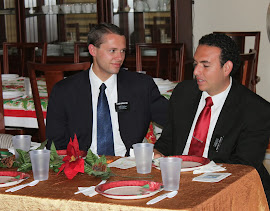